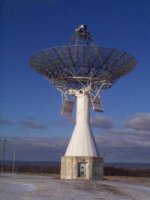 The speaker will describe some current work at SBRAC with a SETI spectrometer with high bandwidth and high resolution using Gnu Radio, and a beefy desktop computer running Fedora 10.

Marcus is a 30-year veteran of the software engineering, telecom and networking industries. He has worked in a number of different roles in the industry, most recently in the CTO Office at Nortel Networks. He is past chair of the Ottawa Carleton Unix Users Group, which eventually morphed into OCLUG. He has chaired security-related working groups in the IETF, including Authenticated Firewall Traversal, and ITRACE–the Internet Trace protocol. Marcus spent 4 years as a member of the Internet Engineering Steering group, where he was a security-area director. He has always had a keen interest in the very happy marriage between science and computing, and a particular fondness for radio astronomy and SETI. He holds several patents in the areas of cryptography and network security.

He makes his home near Smiths Falls, Ontario, with his wife, three children, and two very-old cats.

Wine Is Not an Emulator; the software translates calls to the Windows Application Programming Interface into Posix code and allows Windows programs to run under Linux (and certain other operating systems). But, the Windows API's are Huge, not well documented, full of tricky behaviours and side effects - and no source code is available - to non-residents of Redmond, WA! Not surprising then, that it took 15 years to provide the first stable release - Wine 1.0. We will take a look at how to implement Wine, install and run Windows applications, and review a number of sources that can provide further information and some special assistance.

Alan has been using Ubuntu Linux and a variety of open-source applications for the past three years, and is currently one program away from being Microsoft free. He has been doing a little Wine tasting of late, looking to find the right vintages for both his Windows' application and the Wine translator that will produce the perfect blend.