Shamir's Secret Sharing is a method for distributing a secret amongst a group of participants, where some or all of them are needed in order to reconstruct the secret.

This talk will cover the use of the 'ssss' program (an implementation of Shamir's Secret Sharing Scheme), some example scenarios of why you would use it, and how not to use it. 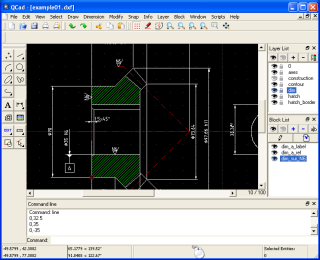 How To Safely Gain Inches With All-Herbal QCad

Title: “How To Safely Gain Inches With All-Herbal QCad” OR “Receive Your QCad Diploma Today And Earn $$$” OR “Drawing Straight Lines: The Real Story”

Ever tried to draw and print something to an exact scale with MonkeySlop Paint? How about The GIMP? Painful, yes? Well, if you have never used a CAD program before prepare to be amazed and astounded at some of the fantastic things you can do with this wonderful software. Fun for the whole family (for some values of 'fun' and 'whole'). This talk contains graphic content. Viewer discretion is advised.

“QCad is a computer-aided design (CAD) software package for 2D design and drafting. It is available for Linux, Mac OS X, Unix and Microsoft Windows. The QCad Community Edition, which lacks functionality present in the full version, is released under the GNU General Public License.” [Excerpt from http://en.wikipedia.org/wiki/QCad]

Tyler Tidman has been wireless since shortly after his birth and has been hacking his own internal firmware for over 30 years. In his spare time, he tries to install Linux on his wife and two cats.