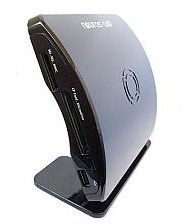 Michael Richardson, Don Kelly and Russell McOrmond will demonstrate a Neuros OSD and how cool it is, and Russell McOrmond will be his typical “downer” and talk about how some of this coolness isn't legal in Canada. The fact that it wasn't legal wasn't an issue in the past as nobody was going to be sued, but it is now important as the target of the Copyright lobby has changed.

Michael Richardson is a self-taught programmer and consultant, and has been involved with network security systems since 1988. After working in nearly every aspect of Ottawa hightech, Michael was a founding employee at Milkyway Networks in 1994, and Solidum Systems Corporation in 1998. While at Milkyway Networks, Michael was responsible for developing the VPN components of the BlackHole firewall, the policy engine, and all kernel components. Solidum designed and sold hardware - IPsec being an important target. Michael is a system software designer and protocol designer. Michael is involved on a daily basis with at the IETF. He is an author on RFC3586, RFC4025 and RFC4322.

Michael has architected a number of IPsec systems, including closed source systems at SSH, work on KAME code in BSD, and work on the Linux FreeS/WAN project. In 2003, Michael founded Xelerance Corporation to support Linux open source security products, including Openswan. In 2009, Michael joined CREDIL.org as a Founding Maker.

Dru and Doug are going to talk about two major open source initiatives that are taking place in Ottawa. One is OSBR, the Open Source Business Resource. OSBR is a local journal related to Open Source as well as a series of educational lectures and boot camps that will be of interest to OCLUG members. OSBR in conjunction with Talent First Network and Carleton University have recently released Ingres Café, an eclipse bundle for the Ingres database. Second, OCLUG members may not be aware, Ottawa is a key hub for development of the open source Ingres database which undergone a significant uptick in popularity since divesting from Computer Associates in 2005.

Dru Lavigne is currently the Editor-in-Chief of the Open Source Business Resource, a free monthly publication covering open source and the commercialization of open source assets. She is founder and current Chair of the BSD Certification Group Inc., a non-profit organization with a mission to create the standard for certifying BSD system administrators. A prolific author, she pens the popular FreeBSD Basics column for O'Reilly and is author of BSD Hacks and The Best of FreeBSD Basics.

Doug Inkster has been working in and around DBMS software since the early 1970's. Since 1994, he has worked on the Ingres server, most specifically as the architect responsible for Ingres query optimization, but also on various other components of the server.