We will be electing a new board for 2008. See the Board Election 2008 Wiki Page for more information. 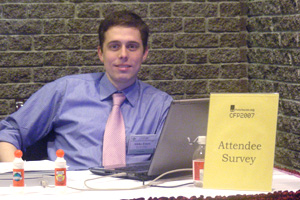 The use of electronic voting machines in elections has been steadily growing in popularity in the United States and Canada over the past decade. So too has concern grown over the ability of these devices to guarantee election results free from error or malfeasance.

Recently a new class of voting system has emerged offering a novel solution: voters are issued receipts. Although these receipt are specially coded to not reveal how people voted, it allows voters a means to verify that their respective votes were correctly included in the election outcome.

In this talk we examine how ballot secrecy and election integrity can be combined and present two examples of receipt-based systems: Punchscan and its successor Scantegrity.

Aleks Essex is a doctoral candidate at the University of Ottawa with a background in information security and its applications to electronic voting. He is a member of Votegrity Labs, an American-Canadian research group focused on the development of “end-to-end” voter-verifiable election platforms.