This is our AGM and election of board members. At this point, we have enough candidates for an election, however we still have to go through the announcement of the slate to the membership and accept any nominations from the floor. Further details follow.

Following the AGM, we will have a talk on Static sites from Scott and a follow-up talk on filesystem frustrations from John.

There will be a one hour pre-meeting item from 17:30 to 18:30 for people who are new to Linux, have general questions, or wish to help out with people who are just getting started.

After the meeting, there will be a social event at one of the nearby pubs or restaurants. A short discussion and vote as to location will be taken then.

After the main talk and possibly the BoF, there will be the opportunity for a GPG key signing. This is a monthly offering, just look for Scott after the talk and we can go from there. Bring some kind of photo ID and some keyslips if you expect people to sign your key.If you need some method of creating pages of keyslips, there is an online slip generator available. 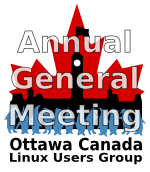 Based on the current rules regarding the board, four is the minimum, six is the maximum. We prefer to have more than the minimum in case of circumstances requiring an existing member to step down.

Proxies can be registered by sending an email to the board email address (board dash members at oclug.on.ca) prior to 17:00 on Wednesday, April 6th so that we have a record prior to the election.

The format will be:

This is a revised and expanded talk based on the talk given about 2 years ago. It seems that static sites are the new hotness and all that was old is new again.

John will be discussing his experiences with file system formats and his decision as to what he has settled on for his multi-platform backups at home and the reson he went with his final choice.

Retired Professor of Management at U of Ottawa.